Past and Current Events

In April of 2019, PRIDE hosted the 2nd annual all-female event dedicated strictly to women and young women to discuss risk and protective factors associated with opioid and other prescription drug abuse. The event was voted as a Top-10 event in the West Alabama area by the Children's Policy Council.

The event took place at the Bryant Conference Center where free lunch was served and no men were allowed once the event began. This was an opportunity for women of all ages to discuss sensitive topics in a public setting while feeling comfortable in their surroundings. Event attendance totaled approximately 175 women, including 17 vendors and breakout sessions discussing various topics regarding women's health and addiction.

In April of 2018, PRIDE hosted an all-female event, the first of its kind in the Tuscaloosa area, dedicated to women and young women to discuss risk and protective factors associated with opioid and other prescription drug abuse.

The event took place at the Tuscaloosa River Market in an intimate setting where dinner was served and no men were allowed once the event began. This was an opportunity for women of all ages to discuss sensitive topics in a public setting while feeling comfortable in their surroundings. Event attendance totaled approximately 200 women, including 17 vendors and six presenters and was a huge success.

In March of 2017, PRIDE partnered with the Tuscaloosa County District Attorney's office and all local area law enforcement to present a free screening of the opiate documentary Chasing the Dragon. The event was held at the historic Bama Theater in downtown Tuscaloosa.

The film was produced by the FBI with assistance from the DEA to bring public awareness to the opioid crisis that has helped lead to the heroin epidemic in the United States. The screening was followed by a discussion panel that included DA Hays Webb, Chief of Police Steve Anderson, and representatives from drug prevention and treatment.

Approximately 300 citizens attended the event and free copies of the documentary were made available to the public. 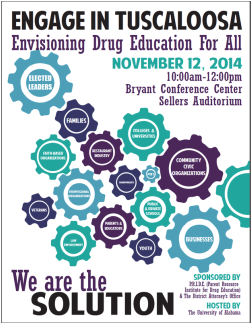 In November of 2014, PRIDE had the honor to partner with the District Attorney's Office to have the first Drug Summit, hosted by the University of Alabama. This was a huge success! It was able to relay the importance of drug education to the community. Each breakout group was able to discuss what they have faced personally and what they can do to continue to help speak on the importance of drug education.

We plan to have another summit in the near future to continue speaking about the importance of education and what this community can do collectively to lower the rates of addiction and overdoses in the area.

Thank you to all who participated and donated countless hours of your time to make this event such a success!

In April of 2015, PRIDE held a fundraiser geared toward parents to help raise awareness of the growing issue of addiction in our country and our community.

The event was made possible with the help of the Leadership Tuscaloosa class of 2015 and the sponsorships of many concerned businesses in the community including Hotel Capstone, McAbee Construction, MacLellan, DCH, BFGoodrich and many more.

In 2015, the Tuscaloosa City School System implemented a system-wide drug screening policy at each of their High Schools. The policy for drug screening includes students that are involved in extra-curricular activities and/or drive a personal vehicle to school.

PRIDE partnered with the City school administration in providing an educational component to the policy for the students and parents at a series of meetings held at each individual high school in the city school system. PRIDE also provides educational programs for students who test positive on a drug test.

The sessions are held annually at each individual high school in late August and early September prior to drug tests being administered to students.

In October of 2016, PRIDE of Tuscaloosa partnered with the City of Tuscaloosa and The Benjamin Tyler Wells Foundation to host Tuscaloosa's first Town Hall Meeting regarding the Heroin Epidemic. We would like to thank all of those in attendance and the panel members that were heavily involved.

The goal of the town hall was to open the conversation about bridging the current gaps in treatment and to highlight the importance of prevention. Many individuals fall through the cracks in current treatment programs throughout the State of Alabama. It is important to start the conversation by opening it up to those in our community, and speak about what each sector can do to help the other succeed. We hope that through this town hall a coalition can be formed to see that a better structure can be put in place to help what the current one lacks.

In June 2015, PRIDE of Tuscaloosa in partnership with the "Say No to MoJoe Movement" held an awareness rally at the Hughes Community Center in Tuscaloosa regarding the continued and expanding use and availability of synthetic marijuana.

The event was covered by the Tuscaloosa News and featured a live demonstration on how synthetic marijuana is made and distributed including the extremely hazardous materials found in the drug.

PRIDE is very thankful for the opportunity to be a part of various events throughout the Tuscaloosa area. PRIDE has been involved in the sober tailgate for the past two years. We also attend local health fairs ranging from college to community health fairs. Also, if you are someone who goes to the chili cookout, come see us next year as "Game of Chili." Not only is our chili great, but we have a fantastic castle for you to see. We are glad to do a presentation to your church or any community function. Derek Osborn, the Executive Director, also does presentations for companies relating to drug policy and procedures. It is our purpose to help the community gain understanding on the growing drug trends throughout the country.